"WHILE STILL ON EARTH" 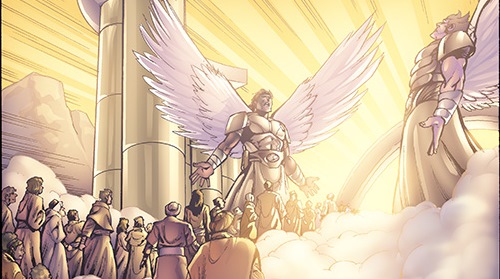 In the last verse of this parable, Abraham makes a startling claim about the rich man’s brothers: “If they do not hear Moses and the Prophets, neither will they be convinced if someone should rise from the dead.”

It’s common for an unbeliever to say something like, “Well, if there’s a God who wants us to believe in him, why doesn’t he write letters in the sky to tell us he’s up there?” But the problem isn’t that God is hiding from us; the problem is our spiritual disabilities. We’re blind, so we don’t see him. We’re deaf, so we don’t listen to his Word. And because our hearts are hard, we don’t acknowledge him.

The rich man’s brothers had the Old Testament available to them, but Abraham tells us if they don’t listen to God’s Word, they wouldn’t listen even if it was spoken to them through someone who rose from the dead.

Our senses can be fooled. Physical miracles are kindnesses from the Lord, but witnessing something extraordinary, even a miracle, doesn’t change our sinful hearts. Likewise, a physical miracle wouldn’t help the rich man’s brothers. The miracle they needed was to turn to God. Those who say they’re “waiting for a sign” to believe in God, reveal their unrepentant heart.

The truth is, even if someone rose from the dead and told them to believe in Jesus, they still wouldn’t turn to him for salvation. When the scribes and Pharisees asked Jesus for a sign, he called them a “wicked and adulterous generation” (Matthew 12:38-39). If a person doesn’t turn to God without a sign, they won’t turn to God (in a meaningful way) after seeing one.

Let’s pray for those who don’t know the Lord that they wouldn’t seek signs, but would confess their sins and accept forgiveness and the saving grace of Jesus Christ!