"CARE FOR THE POOR" 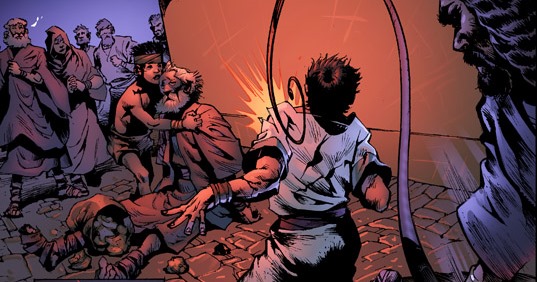 We should ask, “If Christ were on the other side of the street, or the city, or the other side of the world, and he was hungry, thirsty, and helpless, or imprisoned for his faith, would we help him?” Any professing Christian would have to say yes. But we mustn’t forget what Christ himself tells us he will say to us on judgment day: “as you did it to one of the least of these my brothers, you did it to me” (Matthew 25:40). In that sense, Jesus is in our neighborhood, community, city, country, and across the world, in the form of poor and needy people—and especially in those who are persecuted for their faith.

We aren’t told that the rich man was dishonest or irreligious or worse than average. We don’t know whether he despised Lazarus. But we do know that he ignored him. He lived as if the poor man didn’t exist. He didn’t use his God-provided wealth to care for someone in need. The passage suggests that the rich man should have brought Lazarus to his table or joined him at the gate, caring for him, not ignoring or scorning him.

Ignoring the poor is not an option for the godly. In the account of the final judgment, the sin held against the “goats” is not that they did something wrong to those in need, but that they failed to do anything right for them (Matthew 25:31-46). Theirs is not a sin of commission, but of omission. Yet it’s a sin of grave consequence, with eternal implications.

Scripture says that even when we’re not at fault for their condition, we are responsible to help the poor. And God promises he’ll reward us for doing so: “If you help the poor, you are lending to the Lord—and he will repay you!” (Proverbs 19:17). We needn’t feel guilty about the abundance God has entrusted us with. But we are to feel responsible to do what this rich man didn’t—compassionately and wisely use that abundance to help the less fortunate. We are God’s delivery people—much of what he puts in our hands he intends us to pass on to the needy. He doesn’t entrust his wealth to us merely to increase our standard of living, but to increase our standard of giving, so we might invest in eternity. Jesus said, “whatever you wish that others would do to you, do also to them” (Matthew 7:12). John Wesley wrote, “Put yourself in the place of every poor man and deal with him as you would have God deal with you.”