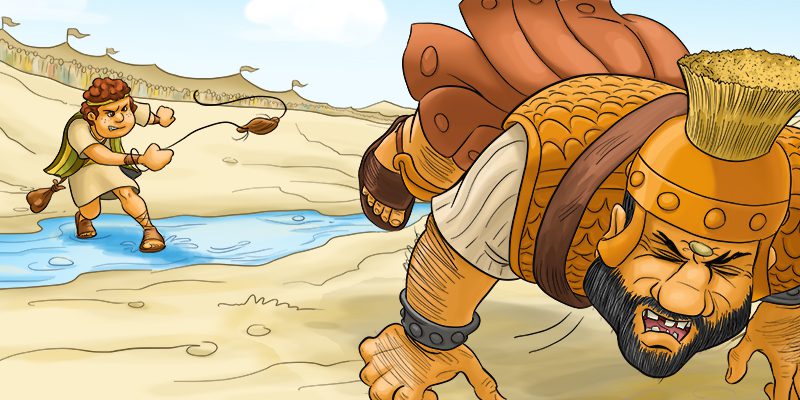 Remember, David didn’t give in to fear or pressure from others. He took a stand for what he loved, and that was God. His next step was to face the enemy.

Long before any of this happened, other things had happened to David. While David was still a young shepherd, a man named Saul was the king of Israel. Saul knew a man named Samuel.  Samuel was a prophet, which is a person who shares messages from God. Samuel gave one of God’s messages to King Saul.  Saul was supposed to do something, but Saul didn’t listen to God, so God told Samuel to make a different boy the new king instead of Saul’s son. Samuel told Jesse, David’s father, to bring seven of his tall, handsome, and strong sons to meet Samuel. Samuel thought surely one of these men would be God’s new king. But God told Samuel not to look at their appearances like others do but to look at their hearts. Samuel asked Jesse if he had any more sons. He said, “Yes, my child, David, who takes care of the sheep.” God instructed Samuel to make David the new king. The Bible says the Spirit of the Lord came powerfully upon David. That day, in God’s eyes, David became the new king.

David humbly knew that he was a king in God’s eyes, so David acted like one—even though he had to wait his turn. David grew in his love and dependence on God. God gave him the courage to fight a lion, a bear, and other wild animals in order to save his sheep from their jaws. David also took his place as a leader and king when he fought Israel’s worst nightmare, Goliath. Using a slingshot and just one stone, David defeated the giant. David gave Israel the victory and God the glory. David had the faith of a king and the humility of a servant.

Remember, when you accept Jesus as your Savior, you become God’s child with His Spirit the same way that David did. Now, with God’s Spirit and a pure heart, you can do all things. You have the power to face and destroy giants.

Greater is God in us than the giant enemies of this world.

Father God, thank you that I can become one of your children. Thank you that you will never leave me, but you will help me grow to know you more. Help me learn more about you and grow in my faith. Amen.

To learn more about the children's books A Giant Headache and The Big Flood visit paulgullyillustrator.com