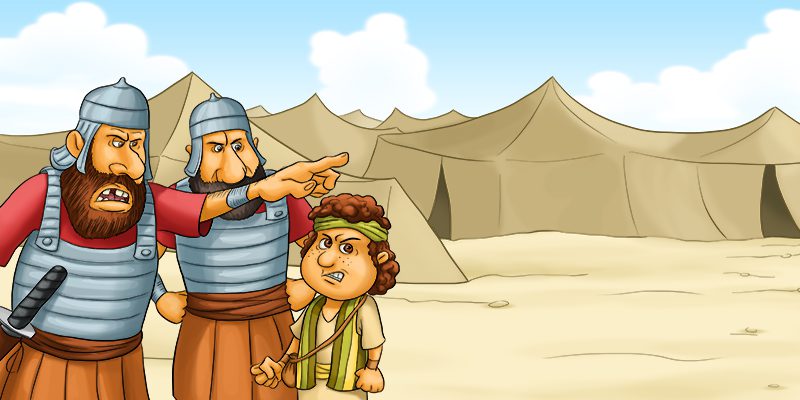 David faced another giant besides Goliath. Before David met the giant in battle, people tried to convince David that the giant Goliath was too strong to fight and that David should not trust God. When David refused, they became angry. They said David was nothing but a little boy, and he should go home and take care of his sheep. These people were his three older brothers!

David had something his brothers didn’t have: He had the spirit of the Lord. God gave David courage, so that he would not feel afraid. He had love for God and love for his country. He had learned self-control from saving his sheep from the jaws of a lion and a bear. Also, David had peace. He kept his cool.

Sometimes, the people closest to you might try to make you feel scared by saying mean things about you or something you want to do. They want you to agree with them, so that they will feel more powerful. David’s brothers, who stood in fear at the battle lines, spoke badly about David because David asked them, “Why is no one facing the giant?” David did what was right and faced the giant on his own. He didn’t listen to his brothers or the giant or allow them to put fear in him. He listened to God.

There’s another reason why David was so brave: He knew that God was on his side! David knew that God was his mighty armor. He knew if God was for him, no one could be against him! So, David ran toward the giant bully who was laughing at him. It didn’t matter to David if the giant was twenty feet tall. David knew that he would win, and he did. God fought the battle for David because David trusted God. Not only did David become a hero, but he also became the King of Israel.

It doesn’t matter what others say about you. What matters is what God says about you!

Father God, help me to have the wisdom to know right from wrong. Not to give in to or follow bullies. To listen to your words and live by them. To trust you for everything. In Jesus name I pray. Amen.