Search & Rescue: A Map For A Warrior's Orientation

Day 5: What We're Up Against-THE KINGDOM OF DARKNESS

There is a stark contrast between what the Two Kingdoms are offering the hearts of men and women; it is as different as life and death. The kingdom of darkness is offering lies, a twisting of reality and truth, that when believed will act as an infection—inhibiting love, binding life, and creating havoc on and in a person’s heart. An infected person can become so lost he will either succumb to the pressure and wilt or, possibly even worse, rise to the situation and conclude he is master of his own destiny able to make life happen on his own. Either way the enemy wins; whether the person believes he has failed or succeeded, he becomes captive to a life of performance that will need to be repeated again and again the rest of his days unless there is healing and restoration.

There is a part of us, a fallen part, that wants to believe the lies and make allowances for self promotion, self provision and self protection.

In John 12:31, Jesus calls Satan the prince of this dark world. It is the world and its great oppressive prince that work in scandalous partnership to bring hardship, heartache and glimpses of hell on earth to the hearts of those who are naïve, ignorant or in denial of evil’s very existence.

Satan and the world accomplish this dastardly feat with just enough maintenance and gentle pressure to virtually go unnoticed and thereby never tip their hand. It’s as if we are drinking a drop of poison a day, just enough to keep us ill and living with an impaired immune system. And, most sinister of all—we’re not aware of our captivity, yet we are being restrained to a marginal existence in a prison we ourselves have aided and participated in building. A jailbreak is our only hope!

In your time alone with God, ask Him:

Father, how does the kingdom of darkness have control of my life?

Jesus, where is Satan gaining a foothold in my heart?

Holy Spirit, how can I engage in the battle? 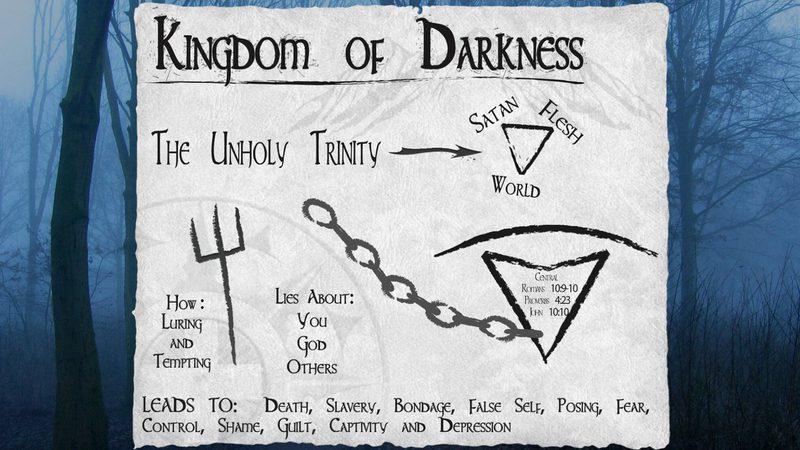