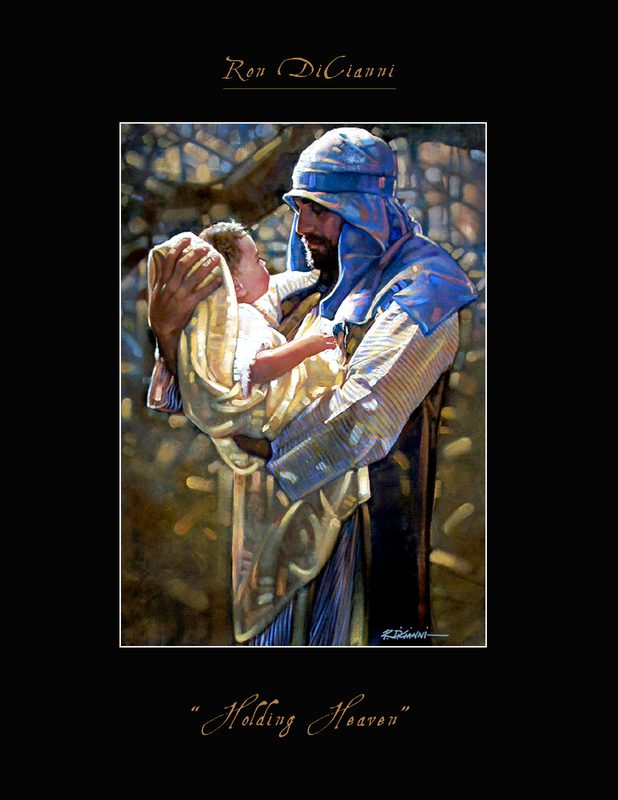 Holding Heaven
by Jerry Jenkins author of The Left Behind Series

The little we know from Scripture of Jesus’ earthly father speaks volumes.

Imagine bearing in your own hands God in the flesh! That unspeakable privilege was Joseph’s, His adoptive father. In Ron DiCianni’s evocative painting, the curious infant studies this man’s face—as we do, wondering what Joseph must be thinking?

Much is known of Mary—how and why she was chosen of God to become the mother of the Christ. But though Joseph is mentioned only in Matthew and Luke, what is said of him makes it clear he also was chosen—despite that he was not physically related to Jesus.

What made him special, and what can we learn from his character?

He was just. That made him want to protect his beloved from scorn (perhaps even death) for being pregnant out of wedlock—when it’s only logical that he also had to suspect her of impurity.

When Joseph was visited in a dream by an angel of the Lord—to tell him Mary was carrying the Christ child and that it fell to him to both take her unto himself as his wife and also to name the Baby—he obeyed without hesitation.

Then Joseph, being aroused from sleep, did as the angel of the Lord commanded him and took to him his wife, and did not know her till she had brought forth her firstborn Son. And he called His name Jesus.

Joseph’s death before Jesus’ public ministry was actually prophesied by the “righteous and devout” Simeon at the temple. Simeon too held the Baby, blessed Him and His parents, but then spoke only to Mary of Jesus’ destiny, including that a sword would pierce her own soul too.

Then Simeon blessed them, and said to Mary His mother, “Behold, this Child is destined for the fall and rising of many in Israel, and for a sign which will be spoken against (yes, a sword will pierce through your own soul also), that the thoughts of many hearts may be revealed.”

Accounts of the crucifixion do not include Joseph, the man privileged to have named the Son of God, so he was spared the piercing of the soul that Mary suffered.

Joseph’s life should inform ours. While we will never be assigned such awesome responsibilities, we can strive to be just and obedient to God without question.

Ron Dicianni is one of today’s most renowned American Artists. His work has been featured in the Smithsonian, he’s painted the President of the United States, and he was at one time the official illustrator of the Olympics. He has collaborated on over 50 book projects; working closely with names like John MacArthur, James Dobson, Max Lucado, Joni Earckson-Tada, Jerry Jenkins, Randy Alcorn, Frank Peretti, Max Davis, Karen Kingsbury, and Michael Card.

Also, join Ron and friends, and 150 other presenters from over 70 countries in a global conference on creativity, Make Jesus Culture.