As I [Pastor David Cook] write this devotion, there are numerous reports of adultery circulating in the Australian media. One is about a senior political leader who has been sexually involved with a woman to whom he is not married. Interestingly, the reports refer to this as an “affair” and “sexual relations”, but none have called it for what it is—adultery. Adultery represents the breaking of a vow between a husband and wife to commit themselves to each other unconditionally and exclusively.

The other thing I have noticed is that everyone affected by adultery is hurt by it. When there is adultery, no one wins. Also, adultery always promises happiness, but always fails to deliver. No one is better off, for there is no more consistent liar than adultery: it breaks every promise.

Proverbs 5 contains a warning against sexual immorality, using adultery as an example. The father tells the son to be on the alert for the seductress and her temptations. The adulteress is appealing (Proverbs 5:3), but following her will end in bitterness and injury (Proverbs 5:4). Her bed, for all its attractiveness, is a grave (Proverbs 5:5). To go to her will bring about great waste (Proverbs 5:9–10) and regret (Proverbs 5:11–14).

Sexual foolishness cannot be hidden from God and will be judged by Him (Proverbs 5:21). Immorality will trap and enslave those who do evil (Proverbs 5:22), lead them astray and ultimately destroy them (Proverbs 5:23).

Foolishness is never more clearly on display than in sexual immorality. The father uses these warnings to snap his son out of complacency and remind him of the dangers of giving in to temptation.

The fruit of wisdom, as seen in faithful, loyal love and commitment in marriage, is universally recognised as the right path. Again, we see that when God’s Word is listened to and obeyed, society, the home, and the individual will all thrive.

We’ve seen how God never tells us “what” to do without telling us “why”. What reasons does Proverbs 5 give to explain His command to walk in sexual purity?

Pray for God’s help in living a life of sexual purity. 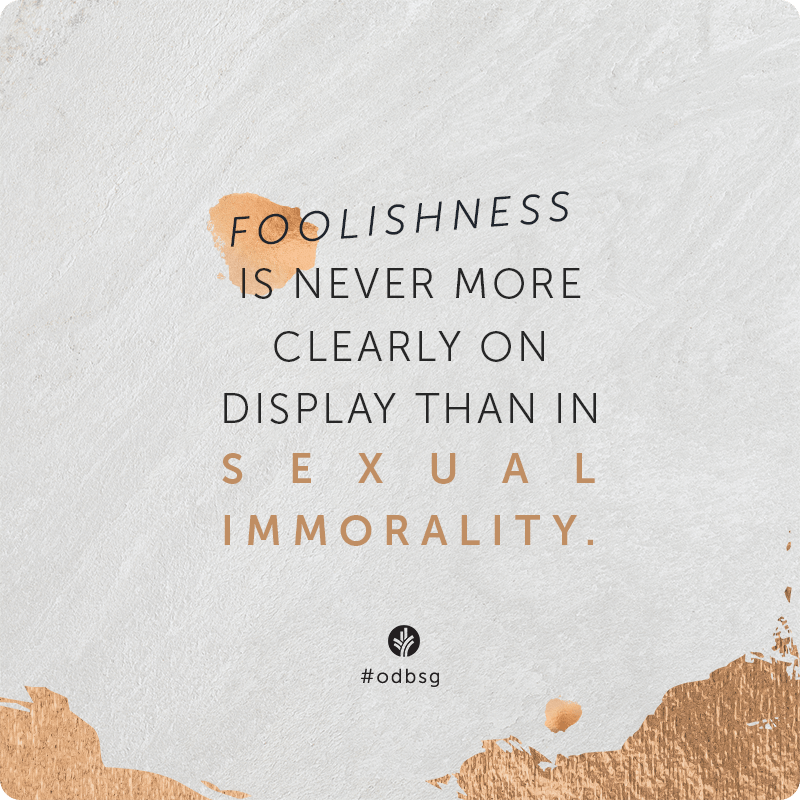