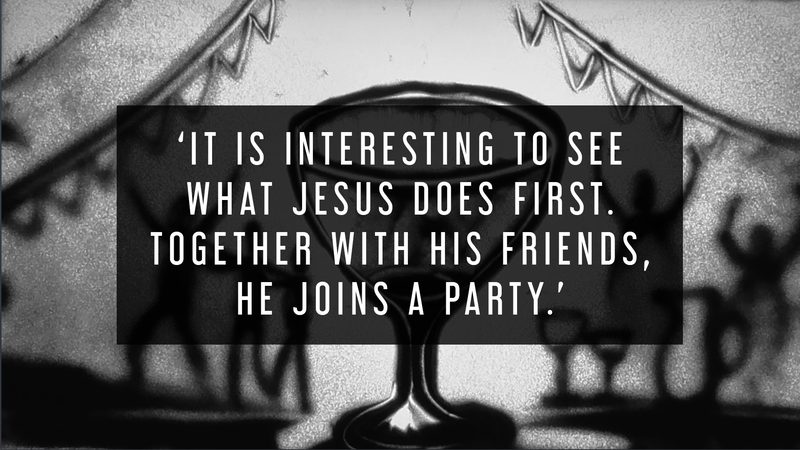 Let’s get this party started...

Jesus must have been about 30 years old when he became well-known to a wider public. We can only guess what he did before that, but it is most likely that he worked as a carpenter in Joseph’s business. Meanwhile, he got some friends and there were rumours that this young rabbi was someone special. His cousin, the prophet John The Forerunner ( also called John The Baptist), is more well-known at this time. But he always states that his purpose does not revolve around him (John 1:19-27). John points people to Jesus: ‘Look, the Lamb of God’ (John 1:36), he says and a number of people start following Jesus.

Surrounded by a group of friends, Jesus sets off. It is interesting to see what Jesus does first. Together with his friends, he joins a party. This is his first public performance after his baptism, after he was appointed to be the One sent by God. According to some of his disciples, the first party he visits is a wedding.

When you read the story in John 2, and you do so with a bit of imagination, it is like a heavenly scene where two people are brought together. In the story of Genesis it appeared that Creation had not been completed perfectly as the Creator himself concluded that it is not good for man to be alone (Genesis 2:18). Fortunately, God brings two people together in the primal story. Only then all was complete. In the gospel of John, in the new story of Creation, Jesus is there at the wedding. It is not good for man to be alone! This marriage is a good reason to get the party started. Jesus saw that it was good. But he was also present when it seemed to go wrong.