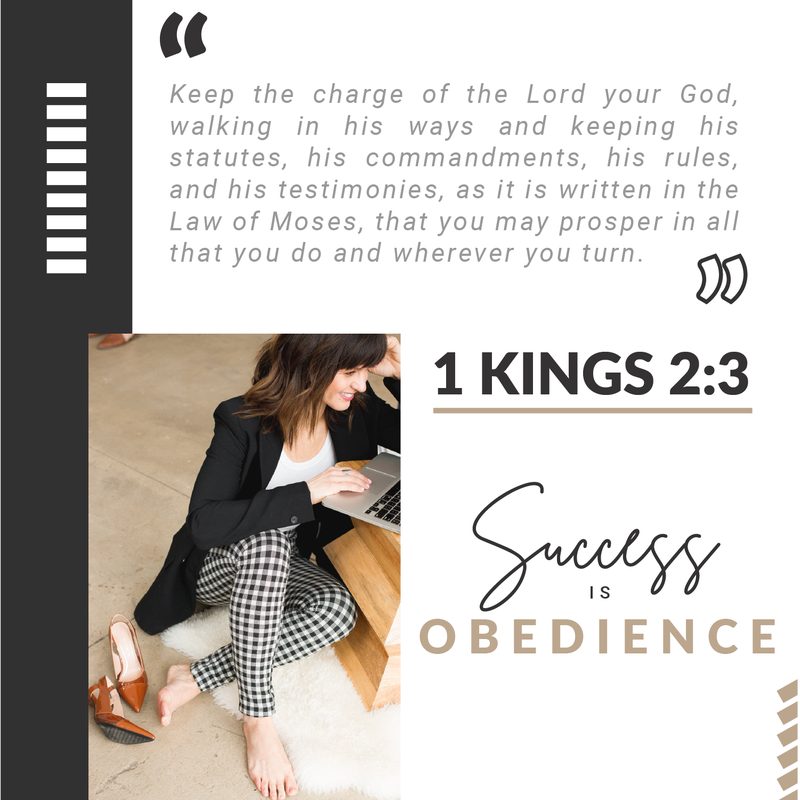 Why are humans so worried about being successful? Probably because we understand that the opposite of success is failure and we certainly don’t want to be failures.

So, we live our lives striving for success in fear of failure which is basically the equivalent of being on a human hamster wheel.

And then we wonder why we’re going nowhere, and yet, we feel absolutely exhausted.

Can obedience to God also come with the list above? Of course but those things cannot be our focus, our end goal, or even our motivation.

It’s our job to obey, and God will then take care of us however He sees fit.

For instance, take the advice David gave to his son, Solomon, at the end of his life. (Keep in mind this is David, the same David that killed Goliath, the great King David that wrote the Psalms!) He had been through some of the highest highs and the lowest lows so there is a lot of wisdom he could have passed on to Solomon.

Re-read the last piece of advice David had for his son:

“When David's time to die drew near, he commanded Solomon his son, saying, ‘I am about to go the way of all the earth. Be strong, and show yourself a man, and keep the charge of the Lord your God, walking in his ways and keeping his statutes, his commandments, his rules, and his testimonies, as it is written in the Law of Moses, that you may prosper in all that you do and wherever you turn,’” 1 Kings 2:1-3

There is nothing wrong with success as long as it’s a by-product of your obedience to God. So, walk in His ways, keep His commandments, love Him so much that you can’t help but obey Him! That is where you will find not only success, but contentment, purpose, joy, and so much more.

God, we love You! Help us to hear Your voice so that we can walk in obedience!  Amen.