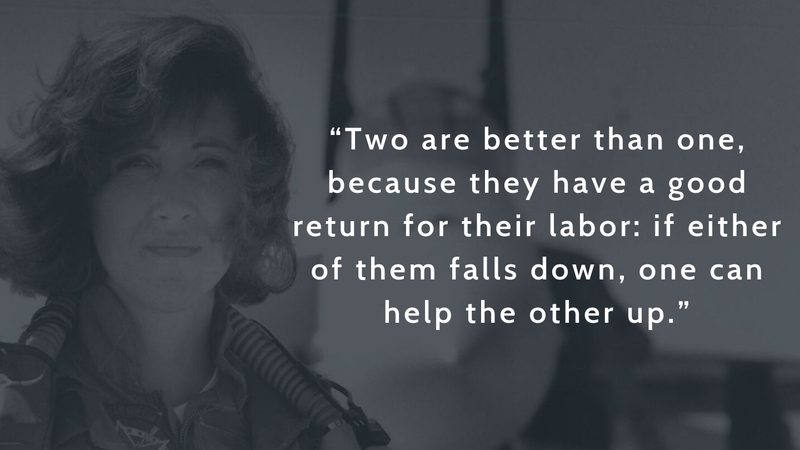 Though I hoped to share my life with a special someone, I wasn’t in a hurry to find him. I had a mental sketch of this man, but he remained faceless. Since marriage and motherhood weren’t areas of life that I could plan and plot, I would have to wait. But I wasn’t going to pine away while I waited.

One Sunday in church, I noticed a young man come in the back and find a seat. He was good-looking, and he seemed comfortable in church, relaxed and happy. That detail seemed to stick in my mind. When we talked, he told me his name was Dean Shults and he was assigned to Intermediate Jet Training. I didn’t tell Dean I was an instructor in his squadron. I didn’t even mention I was in the Navy. He soon found out.

One weekend Ensign Shults and I headed west on a cross-country training flight. He seemed comfortable, a lot more at ease than I had been when I was a student. He was and still is universally charming. But at the time I wondered if he felt like he had to be polite. After all, I was grading him.

During that trip, we talked about home, faith, and our journeys into aviation. Though we had our differences, the more we talked, the more we seemed to click. In the days to come, we started to find excuses to do things together. That sketch of Mr. Wonderful soon had a face, and it was Dean’s. He proposed to me under a full moon, and I was happy to say yes. We planned our wedding, and somehow between the stress of training and wedding arrangements, we arrived at our wedding day more confident than ever in our love for each other. We caught a ride on a MAC (Military Air Command) flight to Hawaii and spent a fabulous week on Maui for our honeymoon.

Dean not only understood my world; he understood me. That was a powerful combination that I could lean on when I faced opposition meant to stop my progress. Eventually we moved to California—but not to the same city. After two years apart, we were stationed together. When I arrived at the squadron, I immediately felt it was the most hostile environment I had ever experienced. Thankfully, Dean and I were able to revel in the more traditional arrangement of living in the same house and, little by little, made our house our home—in spite of my work environment.

Dean and I often discussed our plans for the future and where we might be sent when the next set of orders came through. My career was exciting, but I didn’t want to raise a family in a situation where Dean and I weren’t living in the same place. Although the Navy had been wonderful about keeping us together, we weren’t sure it would continue. I was nearing the end of my Navy commitment, which meant a crossroads lay ahead.

I arrived at my career crossroads in early 1993. Dean and I both made the decision to step into civilian life, one of us at a time. When I finished my final flight, I was simply grateful to be born in a country I was proud to serve, one that had opened so many doors to women during my short time in the military.

I eventually trained to become a pilot for Southwest Airlines. It had a reputation for being financially solid, and they valued their employees and their customers. The overall climate of the commercial airline industry was still rather chilly toward female pilots, and Southwest wasn’t insulated from those attitudes. There was a mini culture war going on, with all the changes in aviation centered around women, that stirred the pot of opinion. And those not in favor did not want to miss their chance to voice or act on it. After leaving the Navy, Dean also trained with Southwest. During this time, Dean helped me keep my sanity. He stayed above the fray, which was a gift to me. I saw that as a couple, we were so much more than what we did for a living. I was thankful for the loving family I had been born into, the wonderful husband whom I shared life with, and eventually the children that I’ve had the privilege to parent.

How have you seen God’s hand in bringing people into your life?

How does a shared faith in God impact your relationship with someone else?

How does the support of those who love you strengthen you to face difficult situations?