When a situation seems unchangeable, prayer appears to be a waste of time. When my day is already jam-packed before I even start it, spending time in prayer may just be one more task to check off my to-do list. Yet, I’m sure of one thing: prayer, far from making us lose time, helps us to actually even gain it!

“Now when Daniel knew that the writing was signed, he went home. And in his upper room, with his windows open toward Jerusalem, he knelt down on his knees three times that day, and prayed and gave thanks before his God, as was his custom since early days.” (see the Bible, Daniel 6:10)

Daniel had the habit of praying three times a day, and each one of his prayers had an impact, not only on his life, but also on his city and people.

Many examples come to mind when prayer saved me a lot of time. Here’s the first: one day in 2001, while I was praying, the Lord inspired me with the idea of evangelizing on the Internet. It became the site ConnaitreDieu.com (Knowing God) that exists today in more than 20 languages and has helped more than 15 million people discover and proclaim faith in Jesus. This concept was born in a time of prayer, and, interestingly, the day of the official launching, a group of Americans were visiting our offices. They asked to pray for us, and it’s the bold prayer of an American brother that propelled a simple French website into an international movement called Jesus.net. This prayer saved us years...light years!

Here’s a second example: while I was taking a time apart in prayer, the Lord put it on my heart to pray for a person I had met 10 years before. Nothing had come from the meeting we’d had. This person, Jean-Pierre Barry, together with his wife and a few friends, had created the largest technical media services group in Europe, Euro Media. In my alone time with God, I started to pray for him and for his wife, Chantal. And what happened? What I couldn’t have done 10 years earlier, the Lord did...without me! It was Jean-Pierre who did everything possible to contact me. We became friends and created together (with Chantal; Muriel, my wife; and another couple, Luc and Anne) a Christian group called ZeWatchers, the goal of which is to share the Good News through media. A true divine acceleration!

At first glance, a simple prayer doesn’t change a lot. Our problems aren’t necessarily resolved the moment we pray, but in heaven, God’s hands start moving to intervene in our favor. Don’t quit praying! Your miracle is in the works!

I invite you to pray with me right now…“Lord, several times, You’ve shown me that one prayer can change everything; yet, sometimes I still throw in the towel when things don’t work out like I wanted. Help me to always make prayer my first resort and to persevere without gazing at the impossibilities...only at You. All things are possible for you! Thank You, Lord, for everything You are going to do in my life. In Your name, amen.”

Thanks for existing!
Eric Célérier 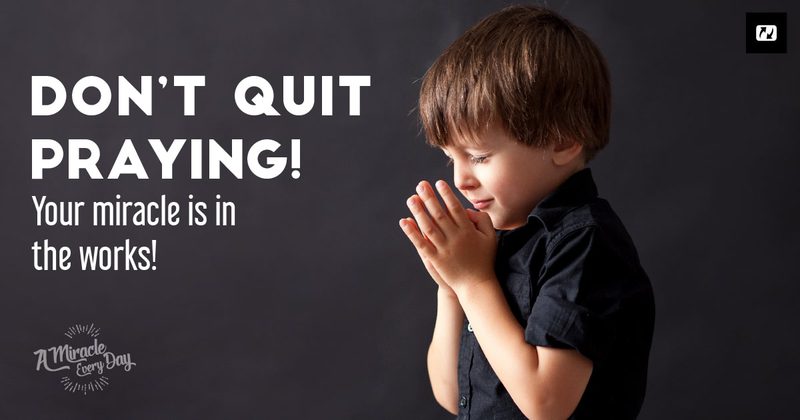