Practicing The Presence Of God: Old Habits For A New Year 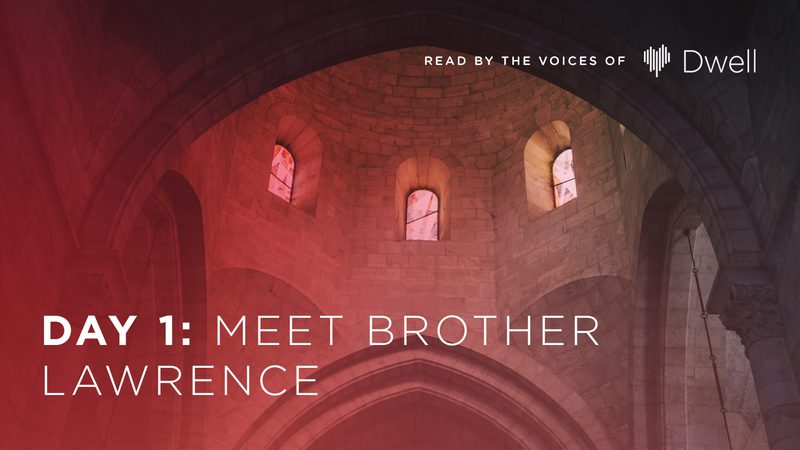 Soldier, footman, cook, these were the occupations of Nicholas Herman, known to history as Brother Lawrence. He was the man who taught us, perhaps more than any other, to integrate our work and faith, to chip away at that old barrier between sacred and secular. Lawrence was born into a peasant family during the tumultuous sixteenth century in France. The great turning point of his life came at age twenty-nine when he entered the Discalced Carmelite monastery in Paris. For the next five decades, he quietly pioneered a new way of life, a way of blending daily work with an ongoing conversation with God. He writes,

“We can do little things for God; I turn the cake that is frying on the pan for love of Him, and [when that’s] done, if there is nothing else to call me, I prostrate myself in worship before Him, who has given me grace to work; afterwards I rise happier than a king. It is enough for me to pick up but a straw from the ground for the love of God.”

The effect of his fifty-one year experiment, of making his work an offering of love, was a man made humble, simple, and joyful, in short – a saint. The Practice of the Presence of God, written by Lawrence, is one of the treasures of Christian devotional writing. It’s a collection of notes, letters, and interviews given by Lawrence that show us how to develop a conversational relationship with God right in the middle of our ordinary life. One of the great ironies of the book is that he never sought to make it public. It was only those closest to him, the ones who experienced the fruit of his practice, that finally made it available to the world. After his death in 1691, they published his story and the workings of his spiritual practice, and since that day, this enduring little book continues to nourish and strengthen those who work through its pages. Brother Lawrence was a mustard seed man, a simple cook who trained for years to hold God in his mind until it became routine, second nature, a holy habit — the mature tree. We can learn to live in his shade, under the strong branches of his life-with-God. With this plan we can make a beginning.

So now that you’ve met Brother Lawrence, let’s roadmap the rest of our plan together. In Day Two, we’ll be looking at the underpinning of any spiritual practice, love. In Day Three, we’ll learn how to actually start practicing God’s presence. In Day Four, we’ll focus on how we respond to resistance and mistakes. And finally in Day Five, we’ll explore who we hope to become by building this practice into our day-to-day life. So there it is, the blueprint for our time together. Now let us lean into this practice, for God is not very far, nor do we have to shout very loud. For in the words of Lawrence himself, “He is nearer to us than we think.”

1. Have you ever considered inviting God into your workplace, involving Him in the actual work you’re doing? What would it look like? How would it work?

2. What do you hope to learn from this listening plan? What could this spiritual discipline of practicing the presence mean for your life with God?

Bits and pieces of The Practice of the Presence of God were letters written from Lawrence to a friend. This week, sit down and write a letter to a spiritual friend. Share with them what you’re learning, how you’re growing, and what you hope to receive from beginning this spiritual practice.

If you're enjoying this listening plan by Dwell, you may enjoy our new scripture listening app that we're creating with the same genuine voices and intimate music you've been listening to. Check us out at https://dwellapp.io