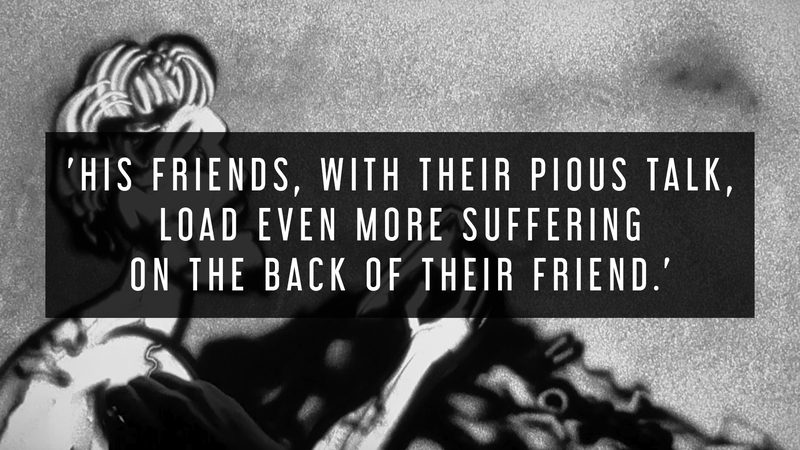 The friends of Job come to encourage him but end up accusing him. There must be a reason for his misery, Job's friends say, looking for the reason for the terrible suffering that happened to Job. Because that's the way God always works. He rewards the righteous and punishes sinners. When misery happens, look for the real reason and come to repentance so that the Lord can show mercy. And so they go on as if the suffering of the man is not enough. Job defends himself time and time again that he has done nothing wrong, no matter how hard the friends press.

The speeches of the friends sound perfect, spiritual, religious. They are almost like sermon notes that you can use on Sundays. If you leave aside the context of the entire book of Job, it all sounds so beautiful. It all seems pretty reasonable and religious as they try to explain suffering. It reminds me of the long boring sermons that I heard as a child in church, where the words and tone almost always sounded the same, so you unconsciously assumed that it was okay. Long chapters in Job's book are filled with dialogues from friends who cannot accept that the suffering happens, without Job having earned it in one way or another.

Bildad, a second friend, also has his opinion. Job should understand his place. If he ever came to repentance, then God would be able to put everything right again:

If you will seek God
and plead with the Almighty for mercy,
if you are pure and upright,
surely then he will rouse himself for you
and restore your rightful habitation.
(Job 8: 5-6)

Job, tired and irritated from all those arguments, continues to defend himself. “My brothers are treacherous as a torrent-bed, as torrential streams that pass away, which are dark with ice, and where the snow hides itself.” (Job 6: 15-16). His friends, with their pious talk, load even more suffering on the back of their friend. Yet the sick and afflicted man does not want to put himself next to God, because “Though I am in the right, my own mouth would condemn me" Job answers (Job 9:20).