Life Principles To Live By

The Principle of Sowing and Reaping

Today is the father of tomorrow.

What we are today is the result of what we’ve been thinking and the way we’ve lived in the past. Those who act wisely today will have wisdom in the future to make wise decisions. The same is true when we come to the subject of finances. Those who save wisely today will have plenty tomorrow. Those who spend everything they have today will have little or nothing in the future. It’s a shortsighted person who thinks only of the now, doing as little as possible, for on pay day he will have no way to avoid the poor quality and small quantity of his rewards. The nation of Israel had to learn this in a very personal way. Their waywardness and failure to do what God instructed them to do often placed them in a position where they would not have His blessings.

The Lord gives principles in Scripture to serve as warnings and as an encouragement. In Galatians 6:7, His Word states, “Do not be deceived, God is not mocked; for whatever a man sows, this he will also reap.” Every farmer understands the meaning of this principle: We reap what we sow, more than we sow, and later than we sow.

The fact that we reap what we sow is good news for those who sow good habits, but a frightening thought for those currently involved in ungodly activities such as promiscuity, drug and alcohol abuse, neglect of family, or mistreatment of others in order to climb the ladder of success. We cannot sow crabgrass and expect to reap pineapples. We cannot sow disobedience to God and expect to reap His blessing. What we sow, we reap. Let us not deceive ourselves: We will reap the harvest of our lives.

This same principle is a comforting and assuring thought to those who faithfully labor under difficult circumstances. “For whatever a man sows, this he will also reap.” Faithfulness in such situations will produce a rich harvest in the future, for our heavenly Father always keeps His promises. 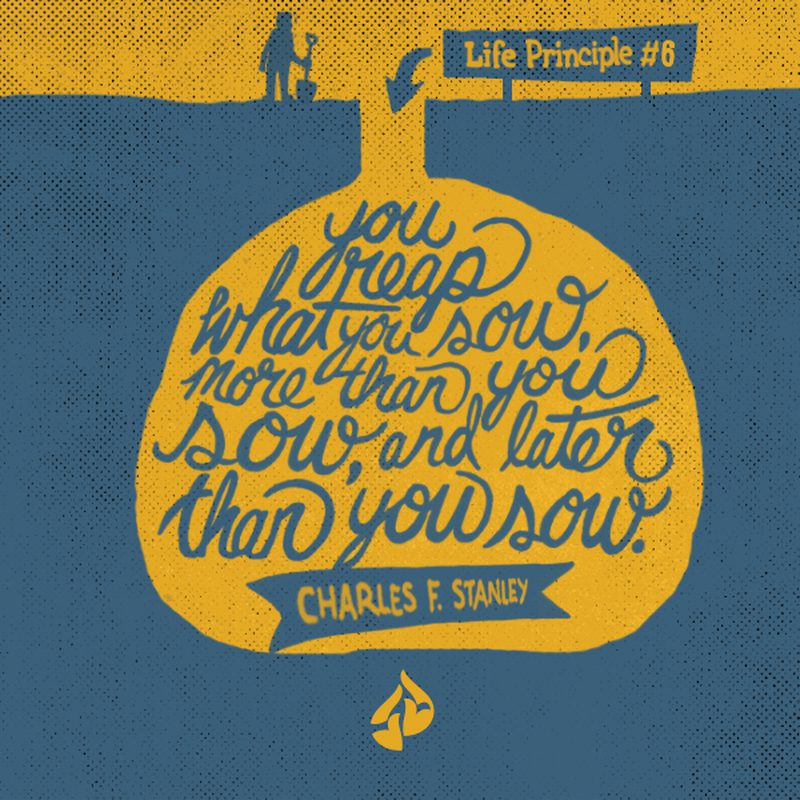